High-Quality Civic Writing
Grace N. wrote a public letter to the 2016 presidential candidates to raise the visibility of campus sexual assault as an important public issue and to ask the candidates to use the bully pulpit to address this issue. This letter represents an exemplary approach to civic writing because of the inclusive open tone employed and the coherent, logical reasoning that establishes an urgency for addressing campus sexual assault. The letter was written as part of the Letters to the Next President mass publishing project. 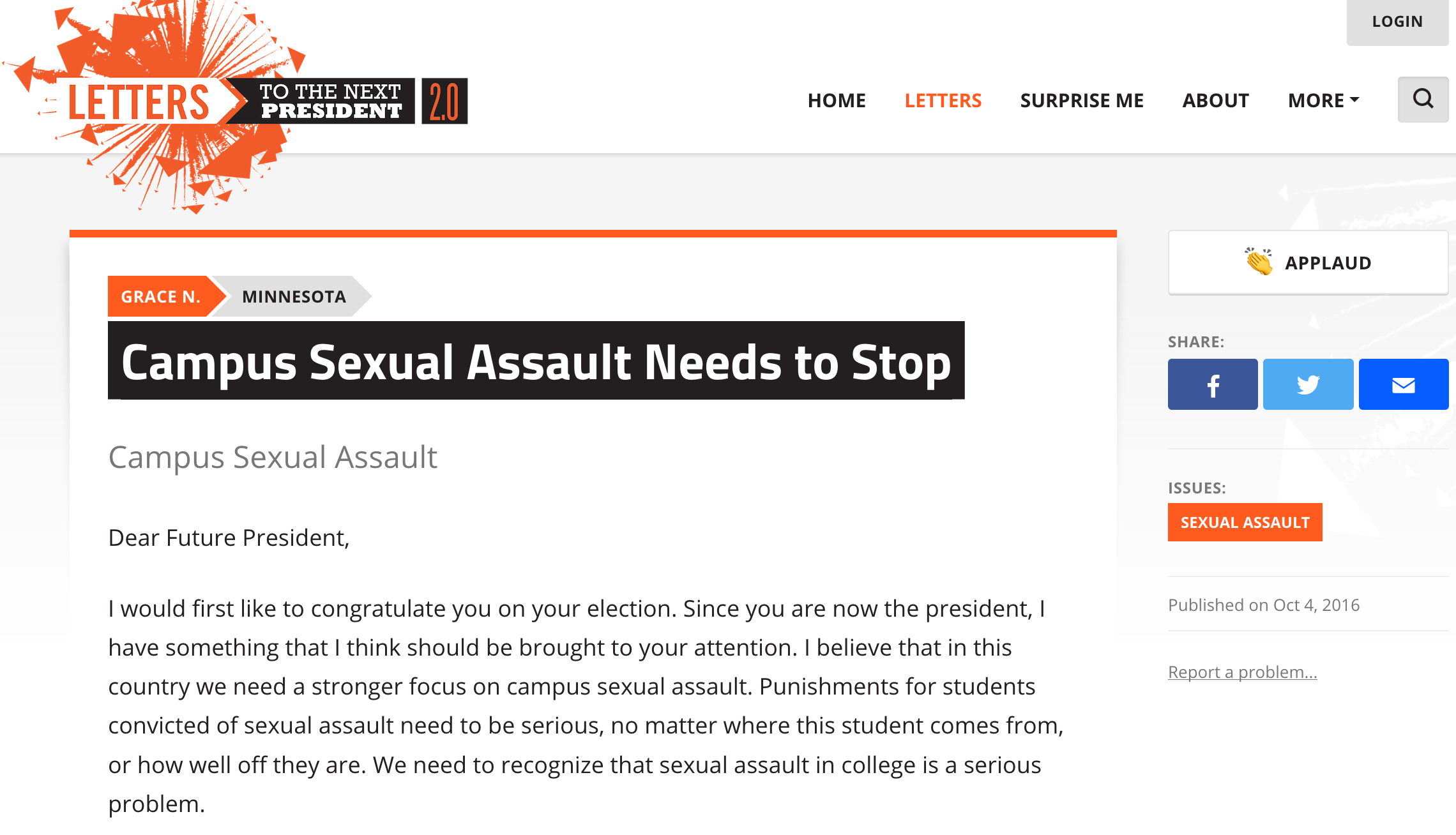 Employs a Public Voice This open letter employs an inclusive tone to engage the audience in dialogue. Two examples illustrate the writing’s tone: “I think we need to do more” and “If these statistics are to be believed…”. In the final paragraph, the writing uses thoughtful repetition of the phrase “I do not want” to underscore the urgency of the issue. The writing effectively establishes the author’s credibility through thoughtful content choices, using carefully selected statistics and anecdotes from a widely publicized, contemporary campus sexual assault case.

Advocates Civic Engagement or Action This letter effectively raises the general public’s awareness of the extent and harmful impact of campus sexual assault. For example, the writing extrapolates from statistics and then lays out the implications for the audience. “If these statistics are to be believed, that means that about 2,340,000 women and 550,000 men will be sexually assaulted by the time they graduate, and the numbers are even higher for LGBT students. You cannot claim that these are isolated incidents after seeing these statistics.”

Argues a Position Based on Reasoning and Evidence This letter uses coherent and logical reasoning to effectively establish the urgency of sexual assault. It explicitly and eloquently states a value structure that college students should not have to be “afraid of what might happen to them” and that sexual assault is a crime that warrants “serious” punishment. Part of what marks this letter exemplary is the judicious selection of evidence coupled with strong analysis and inferential reasoning. Finally, the writing presents evidence and analysis to counter potential objections to the idea that campus sexual assault is a serious issue (for example, the second paragraph).

Employs a Structure to Support a Position The letter presents an organization that effectively develops the position by setting up the breadth of the problem of sexual assault using statistics, and then makes the human impact real by analyzing carefully selected issues from the Brock Turner case. Particularly noteworthy are the two paragraphs that open with relevant and factual information, build a case, and conclude with powerful implications drawn from the data presented.